The lanterns made from waste 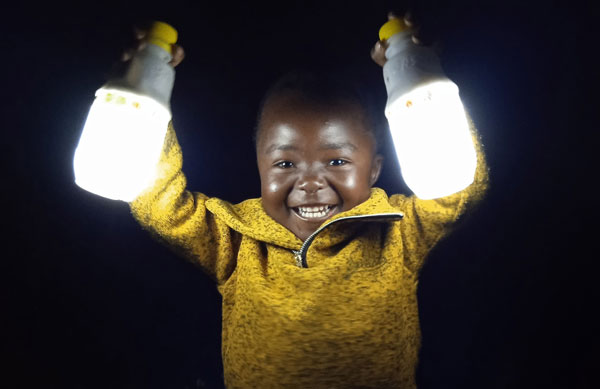 A LIGHT made from discarded water bottles and waste LED lamps is being supplied to off-grid communities in Zimbabwe.

Six hundred million people are without electricity in Africa, with one in three primary schools affected.

Moreover, many people living in rural communities without access to electricity use kerosene as their primary light source.

The use of the fuel oil contributes 270,000 tons of black carbon emissions every year.

Manyonga’s project seeks to use the competitive price of solar power to develop a clean and reliable light source to positively impact the education system.

Manyonga recognises the waste generated with some of the current LED lighting solutions that have been introduced in Africa.

He highlights driver failure as a result of poor-quality components, inefficient heat sink design and poor capacitor construction leading to the improper disposal of LED luminaires before the end of the chip’s expected life span.

He proposes an off-grid, solar, DC powered system created from the re-use of viable LED chips.

LED lights come in small chips which require DC current to operate. These chips are combined either in series or parallel to come up with a light source. With the widespread use of AC systems as standard for distribution at household level, LED lighting require drivers.

The drivers convert AC to DC and also regulate the current and voltage to the LED chips. The drivers contribute to 60 per cent if the failures of LED lights so the unit often ends up reaching the electronic waste stream before all the LED chips have failed.

The charging and control circuits are made using transistors, diodes, resistors and inductors found in the electronic waste. All the functional items are then assembled and housed inside a Chigubhu container.

Students and teachers would be taught the basics of setting up and maintaining the system.

USB charging points can be used for individual Chigubhu Lanterns and other devices.

There will also be collection points for electronic waste such as LED lamps, rechargeable torches, power banks and cell phone batteries.

The community will be trained in re-using this waste to make the Chigubhu Lanterns.

Chigubhu is a Shona word for plastic container/water bottle and the idea behind this concept is based on plastic and electronic waste recycling.

To minimise the cost and maintenance of individual lanterns, they can be recharged at school or any of the central points forming part of the solar lighting system.

The concept is designed to support and work alongside existing initiatives for introducing solar lighting kits across Africa.

Aluwaine Manyonga won the Society of Light and Lighting’s Young Lighter of the Year competition in 2020 for his enterprising work on the Chigubhu lantern and was recently appointed as a judge in the lighting category of the Build Back Awards.